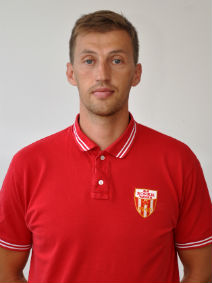 Djordje Micic started playing basketball in the junior categories of our club, where he went through a complete selection and made his debut for the first team in the 2003/04 season. After only one season, he managed to impose himself and move to the then Reflex team from Zeleznik, where he did not stay long, and in the 2005/06 season he returned to Borac again. After playing a great season, he moved again to FMP from Zeleznik for which he performed for two seasons. In the 2008/09 season he realizes his first transfer outside our country and signs for Keravnos from Cyprus. He did not stay long in the sculpture team, so he ended the 2009/10 season in Napredak from Krusevac. Next 2010/11 he signs for German Oldenburg and manages to impose himself on the coach, but next season he moves to Poland. The first team he signed for in Poland was the PBG Basket. In the coming season, due to his excellent performances, he signs for the much more famous Polish team Turov. From Turov in the 2013/14 season he moves to the Bulgarian team of Levski. He starts the 2014/15 competition season at his KK Borac, to sign for Craiova’s Romanian team at half-season. He stayed at the Romanian club until the end of last season.

At the beginning of the 2016/17 season he returns to his home club KK Borac, for which he performed until injury and in the 2017/18 season.

Since the 2019/20 season, Giorgio has ended his playing career and becomes an assistant at the headquarters.