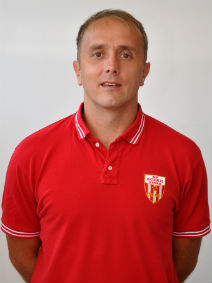 Marko Marinovic started his career at our club for which he performed for four seasons before coming to FMP Železnik in 2004. He spent two seasons with them, winning the 2005 National Cup and the 2005/06 Adriatic League. This is followed by two seasons in Spain – the first (2006/07) in Girona, with which he then won the FIBA ​​Euro Cup (the current FIBA ​​Euro Challenge) and the second in Menorca.

For the 2008/09 season he returned to Serbia and signed a contract with Red Star. In August 2009, he joined the Valencia. He spends one season with them and wins the Euro Cup.

He started the 2010/11 season with Alba but leaves them during the season and signs for the Russian team Krasnaya Kryla where he spends the rest of the season. He also spent the following season in Russia but on the team of Yenisei Krasnoyarsk. He spent the 2012/13 season on the Levski team from Sofia.

In July 2013, he signed a one-year contract with Radnicki from Kragujevac. In February 2014, he became the Eurocup record holder by the number of assists recorded in a single season.

In September 2014, Marinovic signed a one-year contract with Slovenian Union Olympia. In the 2015/16 season, he was a Steaue player from Bucharest. He started the next season on the Krajova team, but left them at the end of December 2016. On January 1, 2017, he returned to our club and signed a contract until the end of the season, which he extended until the end of the 2018/19 season.

He played for the senior national team of Serbia and Montenegro at the 2006 World Cup in Japan. He averaged 5.3 points per game.

Since the 2019/20 season, Marko has decided to end a very successful career and take on the role of Chief of Staff.